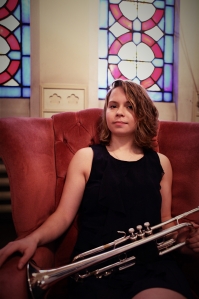 Waite – Rebecca is our organiser and excellent trumpet player. She graduated from Birmingham conservatoire in 2012 where she studied with illustrious trumpet professors such as Andrew Stone-Fewings and Paul Mayes.  Whilst at Birmingham Becky also took any opportunity she could to play Jazz, studying with Purcy Pursglove, playing for Midlands Youth Jazz orchestra and even starting up her own Ska band. After graduating Rebecca is now based in London, working as a freelance musician around the UK and overseas. Her most recent achievements have been performing as a soloist in the Stockholm International Music Competition 2014 and with the All Souls Orchestra on their tour to France in 2013. 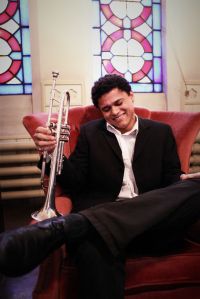 Izalni Nascimento – Izalni  moved from Brasil to study trumpet at Birmingham Conservatoire. Here he met Rebecca and they have been playing together ever since. Izalni moved to London the same year as Rebecca and currently plays freelance around the city and plays regularly for the All Souls Orchestra and Praise Proms. 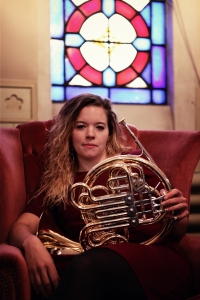 Wilhelm – Julie originates from Canada and came to Britain in 2009 to study a postgraduate degree at the Royal Academy of Music. Since graduating in 2010 Julie has been playing professionally as a freelance horn player in and around London and the UK. Julie has a keen interest in Rock and Folk music and plays Horn for a fusion band. 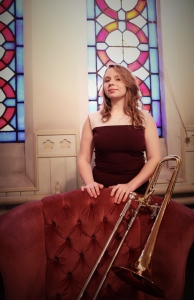 tephanie graduated from the Royal Academy of Music in 2013 where she studied trombone with leading London trombonists such as Dudley Bright, Mark Templeton and Matt Gee. She also had the privilege of studying under the visiting professors Ian Bousfield, Jorgan Van Rijen and Joe Alessi. Stephanie has always had a keen interest in Jazz and once at the Academy, she soon took advantage of second study Jazz and studied with Gordon Campbell and Mark Bassey. Since graduating Stephanie has been freelancing in London and also taken on the Open Academy Fellowship at the Royal Academy of Music. Stephanie also writes and arranges for Chapel Brass as well as building the website. She is also the twin of our trumpeter, Rebecca Waite. 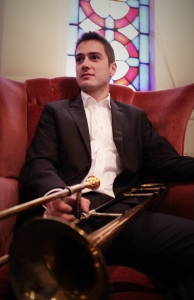 Tom Dunnett – Tom also studied at Birmingham Conservatoire at the same time as Rebecca and Izalni. There, Tom studied Jazz trombone and was always proactive in seeking creative ways to play. Tom now runs his own Big Band, The DunnettBaxtor big band. Tom moved to London earlier this year and regularly plays with the Sid Laurence Big band as well as freelancing on West End shows.